Reinforces vitality, for a healthy and active lifestyle.

A multifunctional food supplement to act as a tonic and stimulant for vitality, increased stamina and energy, promoting a general wellbeing and an active and healthy lifestyle.

Many people who suffer from fatigue reach for stimulants, usually in the form of caffeine or energy drinks to artificially boost their energy levels but create dependence and overload the nervous system. These options may work for the short-term, but they don’t create natural energy. Bioenergy is the natural long-term solution.Trillions of cells make up the human body, all of those cells generate energy and perform life-sustaining metabolic processes. Healthy, vital and energy-generating cells mean a healthy, vital and energetic body. We protect our bodies at a cellular level, protect our overall health and promote energy generating processes, the cells are protected and released to focus on mitochondrial ATP energy production basis of all energy in the body, this means increased vitality, general welfare, quality of life and an active lifestyle. 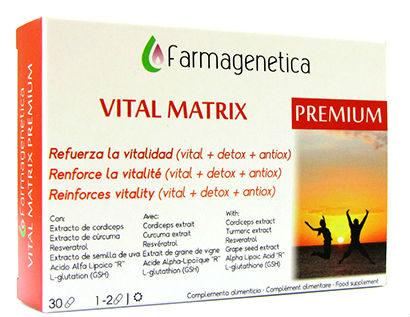 Directions: 1 or 2 capsules a day.

Recommended for anyone who wants to keep a healthy lifestyle that promotes the general welfare, quality of life or an active lifestyle.

.:  Organism's protection at the cellular level. 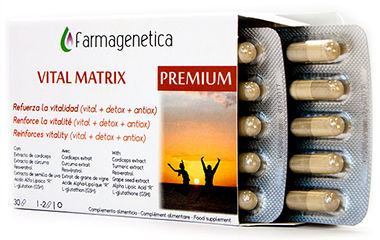 Cordiceps fungus extract, whole fungus (includes mycelium),  has been used as a Chinese medicine for centuries and has been valued for its activity in restoring energy, increasing stamina, promoting longevity and improving quality of life. It possesses antioxidant and cardiovascular properties, improves sexuality, protects the skin against sun light, is a natural anti-inflammatory, strengthens the kidney, the airways and the immune system. Cordiceps are also quite adept at increasing the level of Adenosine Tri-phosphate in the mitochondrial part of human cells. This increase aids in increasing energy levels. The fungus became popular in 1993 when Chinese athletes, who admitted using Cordiceps supplements, beat the world records in the track and field competition at the Stuttgart World Championships for the 1,500-, 3,000-, and 10,000-meter runs. Since then on it has been extensively used among athletes.

Glutathione (GSH) “master antioxidant” is included for its free radical scavenging ability. GSH plays critical roles in protecting cells from oxidative damage and the toxicity of xenobiotic. Most of the GSH in antioxidant defence in cells is utilized by three members of glutathione Peroxidase family, these enzymes catalyse the reduction of hydrogen peroxide by GSH into water and GSSG. It functions both as an antioxidant and an antitoxin and is a major defence system against illness and aging. Is the master cell protector. Glutathione is naturally produced by your body, and plays a central role in the health of every single one of the trillions of cells that make up the human body. Glutathione's critical role is multifunctional. It acts as the body's premiere antioxidant, a cellular detoxifier, and supporter of the immune system. It detoxifies heavy metals (mercury, etc.).

N-acetyl-L-cysteine (NAC), is a glutathione precursor that improves the bioavailability of the amino acid cysteine for its use in the production of glutathione.

Turmeric extract (Sabinsa C3 clinically proven) rich in curcuminoids, “The Golden Goddess”, turmeric has been used for centuries in Ayurveda, the 5,000 year old natural healing system of India. A potent antioxidant that fights free radicals and is known to reduce inflammation. Curcumin is a natural liver protector and detoxifier and also induces Phase II enzymes that support the glutathione detoxification pathway. It is particularly effective in regenerating glutathione after it has been oxidized. It posseses neuroprotective properties.

Resveratrol “The fountain of youth” is an activator of sirt enzymes, enzymes related to longevity that protect cells from aging and death. It reduces oxidative damage and helps to slow the aging process avoiding cell oxidation by free radical scavenging. It promotes longevity through multiple mechanisms. Induces the creation of new mitocondrial which is critical for energy production and the promotion of healthy aging. It also brings important benefits for cardiovascular health with cardioprotective properties.

Quercetin, is an activator of sirt enzymes, enzymes related to longevity that protect cells from aging and death, it is an antioxidant that scavenges free radicals that can damage cells. Protects against mercury-induced DNA-damage and alterations of the redox status. Stabilizes cell membranes and supports vascular function. Induces the creation of new mitocondrial which is critical for energy production and the promotion of healthy aging. Quercetin possesses antiinflammatory properties.

Milk thistle’s Silymarin and silybins. Powerful antioxidant and detoxifier of toxins and heavy metals. Its active constituent, silymarin, is a compound that works to directly support liver health. During Phase I of the detoxification process, silymarin supports the body’s ability to limit lipid peroxidation of hepatocytes. Through addressing both protein synthesis and the permeability and flexibility of cell membranes, silymarin supports not only proper detoxification, but also the healing and regeneration of hepatocytes. Silymarin also works to support metabolism and the body’s ability to maintain healthy levels of the master antioxidant, glutathione.

Alpha Lipoic Acid R, “R” is the most bioavailable and active form of alpha-lipoic acid, as a free radical scavenger is unique because it is both fat and water soluble offering protection both inside and outside of the cell. Has also been shown to extend the biochemical lifetime of other antioxidants such as Glutathione and to support detoxification of heavy metals such as mercury, arsenic and cadmium.

Fructooligosaccharides. Are considered a soluble fiber and prebiotic, which supports the growth and activity of beneficial microorganisms in the intestinal tract, that enhances the immune system and promotes detoxification of toxins.

Chlorella Algae Cracked Cell Powder is included in our formula because of its affinity for binding with heavy metals and toxins. Specifically, chlorella binds with mercury, lead and cadmium, making it one of the most popular detox-supportive supplements.The reason to use the cracked cell type is that only in this manner nutrients will be available through the hard, cellulose Wall. It also brings important benefits for cardiovascular health and strenghtens the immune system. Deep in the heart of each chlorella cell is a unique complex called chlorella growth factor (CGF). This special complex may be the major factor behind why chlorella has survived on this planet for over 540 million years, chlorella grows and reproduces at an astounding rate. Every 20-24 hours it quadruples its numbers. Chlorella growth factor seems to be critical for this fast regeneration, the nucleic acid concentration in chlorella growth factor gives your body essential nourishment for healthy cell reproduction that keeps your body's regenerative process working like a well-oiled machine. The International Olympic Committee supports that athletes who consumed chlorella improved their marks and sports performance.