This food supplement strengthens the immune system and the natural defences of the organism as a whole. 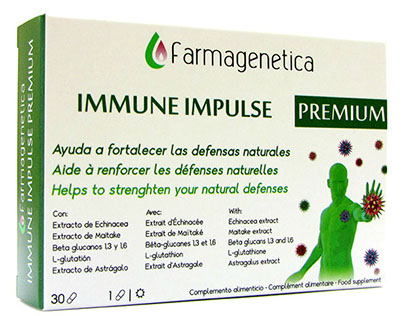 Recommended for anyone who would benefit from immune system support.

.:  Supports and optimizes the immune system by detecting and recognizing external agents that attack our organism.

.:  Supports and optimizes the immune system by signalling and recruiting immune cells to the site of an infection or damage, mounting tailored responses to eliminate the pathogens. 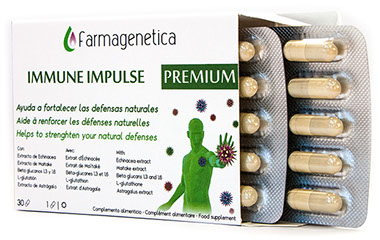 Echinacea purpurea extract, plant widely used in North America and Europe, has a great international recognition in the scientific community as a stimulant of the immune system. It is used against infections, respiratory problems such as colds, flu, sinusitis, etc. The main virtue of the echinacea is its antimicrobial properties against bacteria, fungi and viruses that constitute a true alternative to chemical antibiotics. This plant is considered one of the best natural antibiotics, stimulates the immune system as a whole supporting and modulating both the innate and the adaptive system.

Beta glucans 1,3 and 1,6 from Concentrated Brewer’s yeast cell walls (Saccharomyces cerevisiae), improve the body's immune system defence against foreign invaders by enhancing the ability of macrophages, neutrophils and natural killer cells B and T to respond to and fight a wide range of challenges such as bacteria, viruses, fungi, and parasites.

Maitake mushroom extract, is a highly concentrated source of polisaccharides, betaglucans 1,3 that improve the body's immune system defence against foreign invaders by enhancing the ability of macrophages, neutrophils and natural killer cells B and T to respond to and fight a wide range of challenges such as bacteria, viruses, fungi, and parasites.

Glutathione (GSH), “master antioxidant”, the presence of glutathione in the body is important to the healthy existence and function of the cells of the immune response and to counter the generation of free radicals produced by the immune response. GSH plays critical roles in protecting cells from oxidative damage and the toxicity of xenobiotic. Most of the GSH in antioxidant defence in cells is utilized by three members of glutathione Peroxidase family, these enzymes catalyse the reduction of hydrogen peroxide by GSH into water and GSSG. It functions both as an antioxidant and an antitoxin and is a major defence system against illness and aging. Is the master cell protector. Glutathione's critical role is multifunctional. It acts as the body's premier antioxidant, a cellular detoxifier, and supporter of the immune system. Glutathione is naturally produced by your body, and plays a central role in the health of every single one of the trillions of cells that make up the human body.

Astragalus, astragalus root is being used for many years in China to tone and stimulate the immune system, in special its polysaccharides enhance and regulate immune function. Therefore strengthens the natural defences of the body and is an excellent tonic in adverse conditions, helps to increase physical and mental endurance.