Science and innovation against cellular aging.

Fight aging, turn back the clock.

This food supplement is the most complete antioxidant formula available. It contains synergistic powerful antioxidants scientifically designed to delay aging process and to activate longevity genes making us feel and look younger and improving life quality.

We do age, we are being oxidized and are exposed to highly reactive and toxic molecules (pollution, tobacco, toxins, etc.), called reactive oxygen species (ROS) that damage our bodies. This is balanced by the body’s antioxidant systems. Free radicals can be visualized by cutting an apple open. After a couple minutes, the apple starts to turn brown-this is due to free radical damage. Now in order to protect that apple from turning brown, it is best to put some lemon juice over the apple after it is cut open. The antioxidants from the lemon juice protect the apple from being attacked. It is a scientifically based combination to counteract oxidative stress. They work together in the antioxidant cycle and reach all body compartments stopping the snowballing effect of free radicals that leads to cell damage. 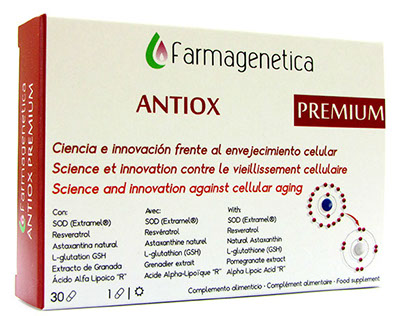 Recommended for anyone who wants to fight aging and its signs and who wants to win the battle against the aging process. 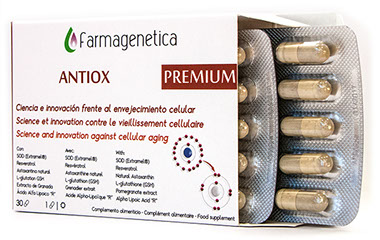 SOD (Super Oxide Dismutase) and Catalase, Extramel® (Cucumis melo extract). Clinically proven. SOD is one of the main antioxidant enzymes found in the body, it scavenges free radicals, it breaks down Superoxide radical and repairs the damaged caused by it to the cells. Levels of SOD decline with age. Clinical trial highlights that an oral supplementation with EXTRAMEL® reduces stress and physical and mental fatigue.

Catalase is another antioxidant enzyme found in the body that scavenges free radicals. It converts hydrogen peroxide (which is dangerous) into water and oxygen (hence finishing up the detoxification process that SOD started).

Glutathione (GSH) “master antioxidant”,  is included for its free radical scavenging ability. GSH plays critical roles in protecting cells from oxidative damage and the toxicity of xenobiotic. Most of the GSH in antioxidant defence in cells is utilized by three members of glutathione Peroxidase family, these enzymes catalyse the reduction of hydrogen peroxide by GSH into water and GSSG. It functions both as an antioxidant and an antitoxin and is a major defence system against illness and aging. Is the master cell protector. Glutathione is naturally produced by your body, and plays a central role in the health of every single one of the trillions of cells that make up the human body. Glutathione's critical role is multifunctional. It acts as the body's premiere antioxidant, a cellular detoxifier, and supporter of the immune system. It detoxifies heavy metals (mercury, etc.).

Manganese and zinc, are also included in this formula to function as cofactors for these and other enzymes and to support detoxification and antioxidant pathways.

Resveratrol “the fountain of youth”: is an activator of sirt enzymes, enzymes related to longevity that protect cells from aging and death. It reduces oxidative damage and helps to slow the aging process avoiding cell oxidation by free radical scavenging. It promotes longevity through multiple mechanisms. It also brings important benefits for cardiovascular health with cardioprotective properties.

Pomegranate extract. It is a fruit with multiple properties: antioxidant, cardioprotective, antiinflammatory, etc. Rich in flavonoids and polyphenols such as ellagitannins, ellagic acid and punicalagins which besides being powerful antioxidants are also useful for preventing proteolytic degradation of existing dermal elastic fibers and for enhancing more efficient elastogenesis in aged skin, they protect the skin from oxidative stress and UV-b radiation that leads to photoaging. Pomegranate shows great promise in averting the numerous pathological changes associated with cardiovascular disease, pomegranate works through several mechanisms to fight cardiovascular disease by: reducing oxidative stress, supporting the synthesis and activity of nitric oxide, inhibiting the oxidation of potentially harmful LDL (low-density lipoprotein). It promotes healthy blood pressure levels, it improves circulation and prevents atherosclerosis. Pomegranate compounds posses anti-inflammatory properties.

Turmeric extract (Sabinsa C3 clinically proven) rich in curcuminoids, “The Golden Goddess”, turmeric has been used for centuries in Ayurveda, the 5,000 year old natural healing system of India. A potent antioxidant that fights free radicals and is known to reduce inflammation. Curcumin is a natural liver protector and detoxifier and also induces Phase II enzymes that support the glutathione detoxification pathway. It is particularly effective in regenerating glutathione after it has been oxidized. It posseses neuroprotective properties.

Quercetin, is an activator of sirt enzymes, enzymes related to longevity that protect cells from aging and death, it is an antioxidant that scavenges free radicals that can damage cells. Protects against mercury-induced DNA-damage and alterations of the redox status. Stabilizes cell membranes and supports vascular function. Quercetin possesses anti-inflammatory properties.

Astaxanthin from algae, “King of the carotenoids”, is a powerful antioxidant, very superior to other carotenoids, that can acces the brain blood barrier and bring antioxidant and anti-inflammatory protection to the brain and central nervous system, with neuroprotective properties, and the eye blood retinal barrier and bring antioxidant and anti-inflammatory protection to the eyes. Astaxanthin may have a number of skin benefits. In particular, astaxanthin appears to provide some degree of sun protection through multiple mechanisms. First, it blocks a modest amount of ultraviolet light directly. Second, it neutralizes some of the free radicals induced by UV radiation and responsible for some of the sun damage (single oxygen…). Third, astaxanthin appears to inhibit the induction of matrix metalloproteinases (MMP) by UV light. (MMP are an important factor in sun damage and skin aging.) Astaxanthin may improve the skin condition. It also brings important benefits for cardiovascular health with cardioprotective properties.  Possesses antiinflammatory properties..

Alpha Lipoic Acid R, “R” is the most bioavailable and active form of alpha-lipoic acid, as a free radical scavenger is unique because it is both fat and water soluble offering protection both inside and outside of the cell. Has also been shown to extend the biochemical lifetime of other antioxidants such as Glutathione and to support detoxification of heavy metals such as mercury, arsenic and cadmium.

Coenzyme Q10, “The Longevity factor”, it is a cofactor in cellular energy and is another important antioxidant, it also brings important benefits for cardiovascular health with cardioprotective properties.